Sr. Mary Kevin of Our Lady of Lourdes, (Nellie Gillic) was born in Oldcastle, Co. Meath on the 3rd April, 2015, the fifth of eight children to William and Mary Gillic.   Her Father was the local teacher and they lived in the teacher’s residence until he retired when they moved to  143 Leinster Rd., Rathmines. Dublin.  Her father had one sister, who became a teacher also and was headmistress in Rosscastle School, Co. Westmeath.

Her mother, Mary (Callary) had just one brother, who became a Priest of the Meath Diocese, later becoming Vicar General of the Diocese.  He wrote a book on Tara.

On finishing her primary schooling she was sent as a boarder to the  Secondary School, run by the Loreto Sisters, recently come to Navan.

Sr. Kevin reached the age of 100 on the 3rd April 2015. As it was Good Friday this year - Sr. Kevin says that she was born during Holy Week - the cycle came around again! We deferred the family celebration until 11th April, Saturday of Easter Week.

His Grace, Archbishop Diarmuid Martin, kindly visited us on Christmas Day and it came up in conversation about the birthday - His Grace said: "Remind me when it comes nearer" which we duly did.

To our pleasant surprise, His Grace offered to come on the 11th to celebrate the Mass - as it was Easter Week and our morning Mass was at 9 am the regular congregation must have got an 'eye-opener' to realize what was happening.

The Chapel was full - and His Grace mentioned Kathleen, Sr. Kevin's sister - who was beautifully decked out in a light-blue suit, being only 94 she looked about 50! The sun obligingly shone - next day there was heavy rain here at that time of the morning.

Created: 30 June 2012
Four years of prayer and waiting have yielded to the celebration of the 50th IEC.

June 9: Already the atmosphere is charged with a sense of wonder and anticipation. "The Congress is just what we needed", people say. Graces are evident. The beautiful weather is surely the first miracle of the Congress. Thanks be to GoThe top priority of some Dignitaries from the ends of the earth, is to visit the Irish missionaries who educated and evangelized them, in their youth. It has come full circle. The heroic men who sacrificed all, in the prime of life, and, like St. Columba, set out as "Pilgrims for Christ", now have a taste of the fruit of their labours. Their former pupils have come to comfort and console them in the pain of old age. A foretaste of Heaven.

A lovely group from Cork, came for Holy Mass, celebrated by Fr. O'Reilly. Their stall in the RDS will promote the New Catechism.

Mass Times In Our Chapel 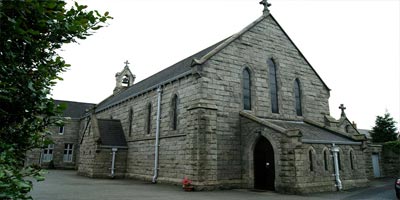 First Saturday of each month, in honour of the Immaculate Heart of Mary; 3.00 p.m.

Exposition Of The Blessed Sacrament 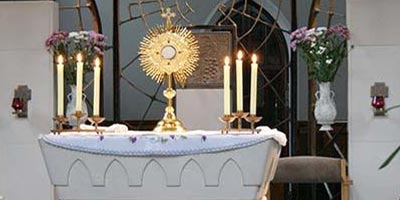 Daily, from 9 a.m. until 12 noon and from 1 p.m. until closing time for the chapel, unless there is afternoon mass (First Saturday ), or cleaning ( usually Thursday afternoon ) in progress.

Sundays, from 10.30 a.m. until 12 noon and from 1 p.m. until closing time for the chapel, The Rosary is at 4 p.m. followed by Evening Prayer and Benediction –(texts are provided).

On First Fridays Exposition is from 8.00 a.m. until closing time for the chapel, Evening Prayer and Benediction is at 4.30 p.m.  (texts are provided).